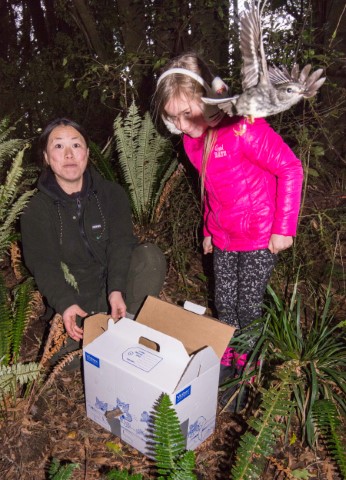 For the first time in 50 years, robin’s song has returned to the Maraetotara Plateau.

A pair of toutouwai (North Island robins) are the first birds to be released as part of the Cape to City project. The robins were captured at Boundary Stream Mainland Island on Maungaharuru on Thursday morning and released into the Hundred Acre Bush along the headlands south of Waimarama that afternoon.

The translocation is the first of its kind for Cape to City, a $6 million collaborative initiative involving 26,000 ha between Hastings and Cape Kidnappers and from Waimarama south to the Kahuranaki forest remnants. In total 90 robins will be re-introduced to Hundred Acre Bush over the next three years.

Cape to City’s vision is “Native species thrive where we live, work, and play”. In addition to translocations, the project is trialling low-cost predator control, increasing native habitat, and encouraging community engagement.

“It’s a very significant moment” said Dr. John McLennan, a local ecologist with Cape to City leading the translocation project. “It’s always great to have the opportunity to restore wildlife.”

Three volunteers assisted with the translocation, including Kaumātua Trevor Taurima from the hapū of Maungharuru-Tangitū. The hapū is a partner in the Poutiri Ao ō Tāne project, a sister project of Cape to City that is located on 8,800 ha and includes Boundary Stream Mainland Island. The translocation was Poutiri Ao ō Tāne’s first opportunity to present Cape to City with a taonga – a highly-prized gift.

Dr. McLennan hopes to capture and translocate an additional 28 robins to the Hundred Acre Bush over the next several months.

Staff from Hawke’s Bay Regional Council and the Department of Conservation, two other Cape to City partners, attended the release ceremony.