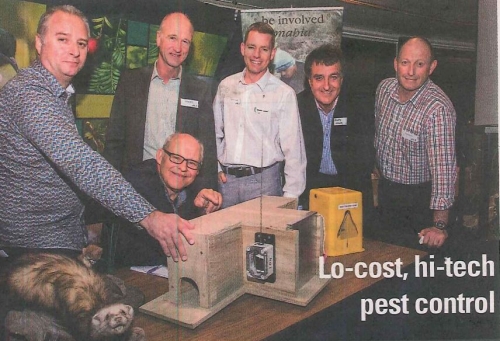 Hawke’s Bay farmers are getting in behind a New Zealand first environmental restoration project, which has just been launched in Napier.

The Cape to City project is a world-leading programme, which will aim to achieve a predator free Hawke’s Bay. It will focus on ultra low-cost, large-scale predator control across 26,000 ha of farmland between Waimarama and Havelock North with the aim to restore native species and plants and add value for farm businesses.

The project represents a significant investment over five years for both Cape to City, and sister project Poutiri Ao ō Tāne, of more than $6 million and is a collaborative partnership between Hawke’s Bay Regional Council, the Department of Conservation, Landcare Research, Cape Sanctuary and the Aotearoa Foundation as well as private business and other Crown Research Institutes.

Cape to City Project Manager, Campbell Leckie says he and his team were excited to launch the project (April 30), which will now begin to focus on predators such as stoats, ferrets, and feral cats.

Mr Leckie says the programme has been modelled on the successes of sister projects, Poutiri Ao ō Tāne, based near Tūtira – which has been running for four years, the privately-funded Cape Sanctuary project and the council’s on farm Possum Control Area Programme.

“Hawke’s Bay Regional Council has been working with farmers to reduce possums to very low levels through the successful Possum Control Area Programme, and this is taking it to the next level.”

“The possum control layer is in place, so our goal is to integrate these other pests, at little or no additional costs to the farming community and to deliver additional benefits to them.”

The aim is to reduce the cost of pest control by 50-80 percent and one of the ways this will be achieved will be through the unique wireless networking of traps.

When pests are caught, a signal is triggered and pest control operators need only check these traps.

“If you say to a farmer, there are 100 traps on your farm and you need to go around them each month to clear and check them – that’s a significant commitment for a farmer who has their own business to run.  But if you have 100 traps with long life lures, such as scent-impregnated oil that are linked wirelessly, this sends a text message as to which of the 3-5 traps over that month have gone off where and when. And that’s a much more manageable commitment” says Mr Leckie.

Farmer involvement is key to the project’s success and the message received so far from focus groups is positive.

Hawke’s Bay farmer and former Federated Farmers President Bruce Wills is very excited about the project and believes it is going to be a game changer for farmers.

“In the last few years we have seen an unbelievable reduction in possum numbers and a huge increase in birds. I can now plant trees and be confident they will survive because the possums aren’t there anymore. Instead of a plague of possums we have a plague of birds. The Cape to City project is taking pest control to a higher level and further protecting our biodiversity.

“Birds are still being hammered by rats, stoats and ferrets. Thirty years ago we had kiwis roaming freely on our farm. I am confident that with Cape to City we will eventually see kiwis roaming again.”

Mr Wills says the new wireless technology is going to save a lot of cost and time for farmers.

“Farmers don’t have a lot of time to continually check bait stations and traps so using this technology is going to make a big difference for us.”

There will also be a huge economic benefit on farms because it will reduce the number of feral cats that carry the disease, toxoplasmosis.

“If toxoplasmosis, spread by feral cats, could be brought under control that would be a real economic benefit to farmers. Bringing clever science and clever technology together is a win-win for farmers who can enjoy more production and biodiversity.”

The Cape to City project is being championed by Cape Sanctuary owner Andy Lowe with project ambassador Ruud Kleinpaste “The Bugman” also being a major driver.

Lou Sanson, Director-General of the Department of Conservation, believes that the Cape to City project is at the cutting edge of New Zealand conservation efforts using strategic partnerships.

“The chance to have Government, Local Government, Landcare Research and Hawke’s Bay landowners come together with the help of the Aotearoa Foundation, chaired by Julian Robertson, to bring back our birds is a once in a lifetime opportunity,” says Mr Sanson.

HBRC Chairman Fenton Wilson agrees “Success long term for New Zealand’s unique biodiversity rests on our ability to integrate public and private biodiversity efforts across New Zealand. For that to succeed it must be beneficial for our farming community. This is one of the cornerstones of the Hawke’s Bay regional biodiversity strategy.”