Hapū speak out at Cape to City kaitiakitanga hui 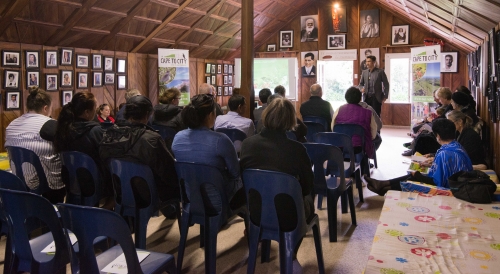 He aha te mea nui o te ao
What is the most important thing in the world?

For the nearly forty participants of Wednesday’s Cape to City kaitiakitanga hui, the importance of people was a guiding principle of the day’s discussions.

It was also a challenge: to foster and improve Māori collaboration as the project continues to grow.

The hui, which took place on the Waimārama marae, presented the first opportunity for Hapū within the Cape to City footprint to discuss and contribute to the groundbreaking native species restoration project. Representatives from Ngāti Pāhauwera, Ngāti Hineuru, and the Matahiwi Marae attended, along with participants from the Hastings District Council, Sustaining Hawke’s Bay Trust, and the East Coast Hawke's Bay Conservation Board.

The hui was described as ‘a time of healing’ and ‘a chance to come together’ in support of the Cape to City project.

‘All the pieces are available,’ said Des Ratima, cultural consultant for the Cape to City project and one of the event’s facilitators. ‘If we’re not serious about this, we’re going to miss an absolutely magnificent opportunity to transform.’

‘We’ve got to be thinking: How do I participate? We’re the missing link — we just need a bit of courage to bring it all together.’

Following a pōwhiri, Department of Conservation and Hawke’s Bay Regional Council team members presented an overview of Cape to City. The agencies are two of a number of partners involved in the project, which encompasses 26,000 ha between Hastings, Waimarama, and Cape Kidnappers.

Maungaharuru-Tangitū also attended the hui to discuss their involvement in Poutiri Ao ō Tāne, an ongoing 8,800 ha restoration project that began in 2012. This landscape-scale initiative in northern Hawke’s Bay was a catalyst for Cape to City.

The afternoon was set aside to open the floor to questions, concerns, and opportunities for collaboration. Topics ranged from queries about pest control participation on farms to finding new ways of incorporating Mātauranga Māori into project outreach. A key focus was on sharing the stories of Te Matau a Māui, the region within the project’s footprint, in order to encourage awareness of Cape to City’s vision: ‘Native species thrive where we live, work, and play’.

‘The vision is about restoration,’ said Mr. Ratima. ‘We’re turning it back to the way things used to be. And that’s where we need to be involved.’

The conversation has only just begun. A follow-up kaitiakitanga hui is expected to take place later this year.