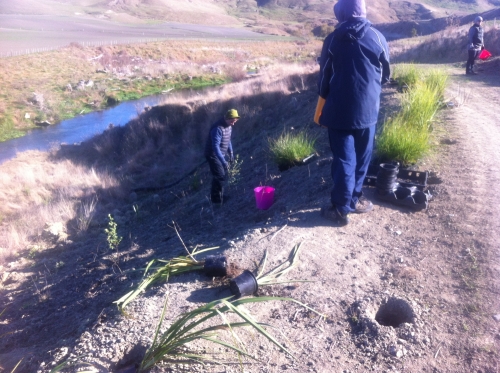 Thanks to the help of over 80 volunteers, 1,300 new native plants now adorn the hillsides behind Te Awanga.

On Sunday 24 July, the Clifton County Cricket Club held its fourth annual community planting day on the Nilsson farm property. This year’s planting marked the first collaboration between the cricket club and the Cape to City project, an initiative to see “Native species thrive where we live, work and play” on 26,000 ha between Hastings, Waimarama and Cape Kidnappers.

Volunteers from the Club, the Cape to City project, the Haumoana school and EIT spent two hours planting flaxes, kowhai and other native species throughout the property. The event culminated in a sausage sizzle and spot prizes for the participants.

Matt Nilsson, who has been leasing the farm for the past decade, said he and his family have seen big changes since the community plantings began.

“We now have pateke nesting here, and we’re starting to see some of the same species of birds that live up in the Cape Sanctuary”, says Mr. Nilsson. “It’s pretty exciting. The birdlife is slowly but surely coming back.”

“This is an excellent opportunity for conservation,” agrees Clifton County Cricket Club restoration project manager Kate Howard. “At some point you’ll be able to come back here and be surrounded by native bush.”

“The planting is really a partnership between the club, the landowners, and the farmers, and it’s great to be doing work that benefits everyone.”

Ms. Howard was “absolutely thrilled” with the number of volunteers who attended, including a group of 30 Southeast Asian government officials from EIT’s English language training programme.

The cricket club received assistance from the Department of Conservation Community Fund for the event. The final club planting is slated to take place next year.