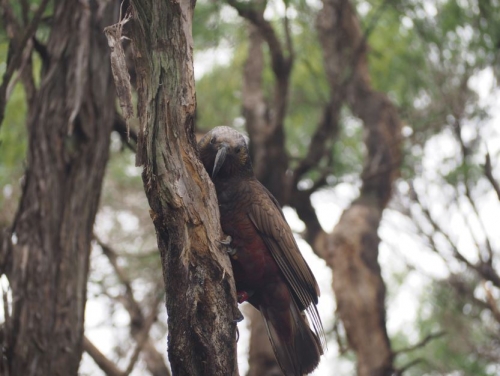 Hawke’s Bay is closer to having a self-sustaining kākā population with the release of six more birds at Boundary Stream Scenic Reserve today.

This latest release of kākā into the reserve on the Maungaharuru Range will bring the total parrot population up to at least 21.

Department of Conservation Biodiversity Ranger Kelly Eaton says while the birds are endemic to the region, the introduction of predators and deforestation of the area meant the kākā ultimately disappeared.

“By reducing predator numbers through intensive predator control methods such as the 2000 plus traps set in the region, and by reintroducing kākā we hope to re-establish the Maungaharuru population,” she says.

“Locally, natural populations are still found in the Kaweka Forest Park and Maungataniwha, which as the kākā flies is not that far away. As wild birds fly past we hope they may be enticed to drop by and possibly stay as the new population starts to grow.”

Maungaharuru-Tangitū Trust Kaiwahakahaere Matua, General Manager, Shayne Walker says the release of more taonga in to Maungaharuru is another important step toward the reverberation of the Maunga where the bird life once blocked out the sun.

“As Tangata whenua, we are very pleased with our collaboration with DOC, Hawke’s Bay Regional Council and others in reintroducing kākā and other taonga in seeking to restore the Mauri of Maungaharuru, Tangitū and our Kaitiakitanga,” he says.

Ms Eaton says this year DOC has been lucky enough to receive a bird from the Kāpiti area.

“As we are building a founding population it is important for the birds to be from a range of genetic backgrounds. So, a bird from Kāpiti was a very welcome addition,” she says.

When new kākā come to Boundary Stream DOC holds them within an aviary for one to two months so the birds become familiar with the area and natural food sources.

On release day doors are gently opened and the birds fly out when they are ready.

“So far we have seen at least five unbanded [leg tags] birds in the area. All the birds we release have bands and anything without has either been hatched in the area or come in from other wild populations,” says Ms Eaton.

With the newcomers still needing attention to anchor them to the region, DOC is looking for volunteers to help our Rangers feed the birds daily over the next few months.

If anyone is interested in this they can contact the Ahuriri-Napier DOC office – DOC is happy to offer free accommodation at Boundary Stream to those wanting to help.

However, DOC discourages people feeding the kākā by hand as wild birds need to be wild. The kākā also must be fed only the food DOC provides as some things are poisonous to the birds.