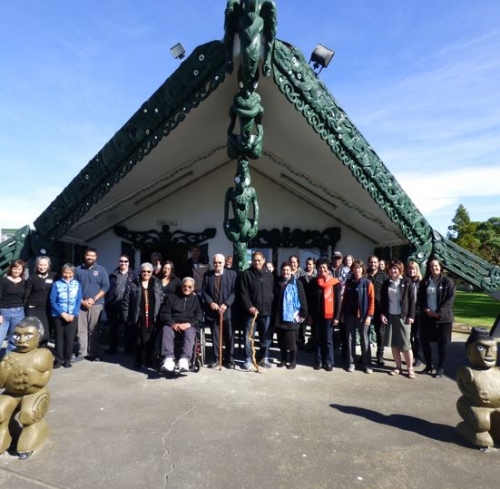 The aim of the hui was to progress engagement with Māori and the community to help Cape to City’s programmes grow to suit the needs of Hawke’s Bay.

It was also a way of establishing an engagement blueprint for future conservation projects.

A key theme that emerged was the importance of he tangata, the people. The hui included ways to develop and promote Māori engagement and kaitiakitanga; define how Cape to City will prosper; and come up with ideas and tools to be used in other conservation projects.

Another project that will benefit is Cape to City’s sister project, Poutiri Ao ō Tāne, an ongoing 8,800 ha restoration project that began in 2011.

Yesterday was also an opportunity for Cape to City project partners to follow up on topics discussed at the hui in September last year at Waimarama Marae.

Des Ratima, cultural consultant for the Cape to City, says, “it’s encouraging to work collaboratively for such an important kaupapa that will leave our environment, our communities and our children a legacy of partnership, collaboration and a connectedness with Papatuanuku for the future of our nation.”

The hui covered a range of topics from pest control participation on farms, to finding new ways of incorporating Mātauranga Māori into project outreach.

A key focus was on sharing the stories of Te Matau a Māui, the area which Cape to City is part of, to encourage awareness of the project vision, which is about being surrounded by native species in every part of our lives.

“These hui are such a valuable opportunity to engage with hapū members, discuss the Cape to City project and areas where we can collaborate or support each other's visions. It’s through working together that we will make the biggest gains and we are very grateful to Matahiwi Marae for hosting the hui today,” says Wendy Rakete-Stones, Project Leader for the Cape to City project.

The hui is taking place at a critical time for Cape to City, as decision-makers are now considering how to roll out predator control across the wider Hawkes Bay region.

The Cape to City project is a step towards achieving the Government’s Predator Free 2050 ambition.

Cape to City began in 2015. It’s a ground-breaking collaborative restoration project on 26,000 ha between Hastings, Waimarama, and Cape Kidnappers. The vision is to have native species thriving where we live, work and play.