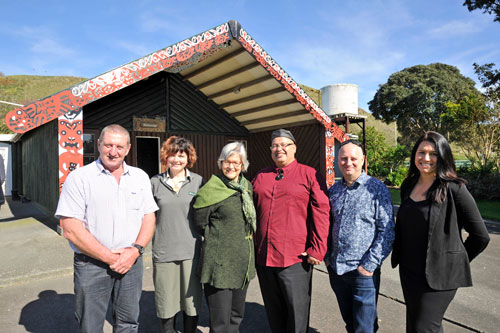 The four-year project aimed at removing possums, and controlling mustelids and feral cats from Mahia Peninsula has been named “Whakatipu Mahia – Predator Free Mahia” at a community meeting yesterday.

Iwi, community, central and local government gathered at Tuahuru marae to discuss progress on a landscape scale project aimed at enhancing biodiversity on the peninsula alongside sustainable socio-economic outcomes.

In July, Hawke’s Bay Regional Council and Predator Free 2050 Ltd launched a project aimed at creating a Predator Free Hawke’s Bay. The first phase of the $4.86 million project will focus on removing possums from 14,500 hectares of land on Mahia Peninsula within four years, as an initial step towards ridding the region of predators.  It focuses strongly on innnovation and eradication within the farmland predator control context said Rongomaiwahine Chairperson Moana Rongo.

“It is a pleasure to share our community vision of a restored Mahia. The vision is embodied in the name ‘Whakatipu’ meaning growth or re-birth,” Moana said.

“It takes a village to raise a child and it takes a community to save our wildlife. That’s certainly the case in Mahia where iwi and hapu, community members, central government and local councils have all come together to work make this special place a haven for our native plants and wildlife,” said Conservation Minister Eugenie Sage.

“I am impressed by the energy and passion that so many people here have for the project and I will watch its development with great interest,” Minister Sage said.

Following the community meeting the Minister was escorted on a trip to Onenui Station to showcase the leadership role landowners play in landscape-scale conservation through Ngā Whenua Rāhui kawenata agreements (conservation covenant for Māori landowners). Onenui Station is a significant land block within the Mahia landscape, the third largest tract of remaining forest on the Mahia Peninsula and the largest on the peninsula’s south-eastern coast.