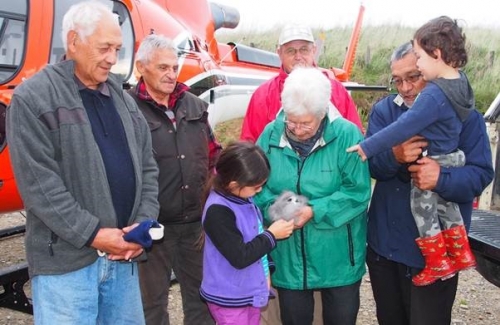 This year marks the fourth time Department of Conservation staff and their Poutiri Ao ō Tāne partners will translocate Kōrure (mottled petrels) as part of a unique conservation project.

The Kōrure travelled from the remote Whenua Hou (Codfish Island), off New Zealand’s southern coast to their new home at Maungaharuru, just north east of Napier.

Poutiri Ao ō Tāne (which is Cape to City’s sister project) is an ecological and social restoration project. It’s located in the Maungaharuru-Tūtira catchment, 60km north of Napier with the Boundary Stream Mainland Island at its heart.

This fourth translocation of Kōrure from Whenua Hou gives 67 birds a new home. This will hopefully put the total number of relocated birds to over 200 in four years.

These translocations are part of an effort to restore seabird populations, which are culturally significant to Māori. They’re also ecologically significant, partly because of the nutrients they deposit from the sea back into the native bush.

Kaumātua Bevan Taylor explains "This programme is exciting as it is trying to restore birdlife where it was once prolific. In the times of the tīpuna (ancestors), when the waka Tākitimu sailed by, the tōhunga (high priest) Tūpai cast his rākau (staff) onto Maungaharuru, gifting it the mauri (life force) of birdlife. Receiving the kōrure today supports that kaupapa (programme), so that the story will live on for future generations."

Historically, bird numbers, including Kōrure were so great, the mountain roared every morning as the birds took flight and again when they returned in the evening.

Maungaharuru is the ‘mountain that rumbles and roars’.

Having stable weather conditions for the translocation was vital, as the birds were first transported from Whenua Hou by helicopter then transferred to a plane for the flight to Hawke’s Bay. A second helicopter ride delivered the chicks to their new home at Maungaharuru.

Connie Norgate, Operations Manager for the Ahuriri/Napier Region, says, “It was a massive day of travel for these chicks, who have yet to take their first real flight.”

When the birds arrived at Boundary Stream they were blessed by Kaumātua Matiu Eru, rehydrated and released into artificial burrows where they will remain until they are ready to fly.

Over the next five to six weeks, Department of Conservation staff, with the help of a large group of volunteers will feed and monitor the chicks in their burrows.

Connie says, “We rely heavily on the support of our wonderful volunteers. Without their help, it would be difficult to maintain the workload.”

These Kōrure chicks are being contained within a 1.9ha predator proof fence to keep them safe from predators such as stoats and wild cats.

It’s important that the chicks be translocated at a young age, because Kōrure take a mental picture of their nest site when they emerge from the burrow for the first time. Incredibly, their nest site is where they will return to breed in hopefully four to five years’ time.

After fledging, the birds will make the 24km trip from Maungaharuru to the sea and will spend the next four to five years traversing the Southern Ocean.

They’ll cover thousands of kilometres and battle the wild conditions to hopefully return and breed, once again making Maungaharuru the “mountain that rumbles and roars” with bird song and life.