An artist’s vision of conservation in Hawke’s Bay 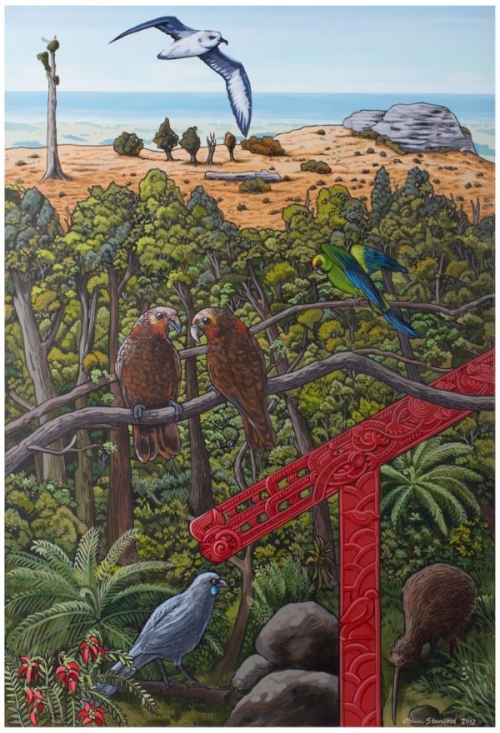 Attendees of this year’s A&P show will have a creative chance to help restore native species in Hawke’s Bay.

Limited edition prints of ‘Boundary Stream’, an acrylic on canvas painting by Napier artist John Staniford, will be available for sale at the event. The painting commemorates the success of Poutiri Ao ō Tāne, an ecological and social project that began in 2011 to ‘restore the cloak of Papatūānuku (Earth Mother)’. Poutiri Ao ō Tāne includes an 8,000 ha predator-control initiative which later became the catalyst for Cape to City, a landscape-scale restoration project between Hastings, Cape Kidnappers, and Waimarama.

‘Boundary Stream’, done in Mr. Staniford’s distinctly colourful and hard-edged style, illustrates various native species – kōkako, kiwi, kākā, kākāriki, and tītī (Cook’s petrel) – that can be found within the Poutiri Ao ō Tāne footprint. It also depicts a waharoa carved by Kaumātua Bevan Taylor of Maungaharuru-Tangitū and landscapes from Boundary Stream Mainland Island, a protected reserve at the heart of the project.

Mr. Staniford visited the mainland island after learning about Poutiri Ao ō Tāne. He said his painting came about as a result of being ‘moved’ by the project’s accomplishments.

‘I was very impressed with what I saw,’ said Mr. Staniford. ‘As an artist I have always had a passion for New Zealand’s native bush and birdlife, and I am humbled by what Poutiri Ao ō Tāne is doing to protect our heritage for future generations. I’m very pleased to be involved in this project with my painting.’

Mr. Staniford completed ‘Boundary Stream’ in 2012 and officially donated the painting to Poutiri Ao ō Tāne in July. The painting will be gifted to the Aotearoa Foundation, the project’s major sponsor, later this year.

The A&P show takes place at the Hawke’s Bay Showgrounds in Hastings from 19 – 21 October. Poutiri Ao ō Tāne and Cape to City will be hosting a joint exhibit in the Enviro Shed. Prints of ‘Boundary Stream’ will be available for on-site purchasing and ordering at $35 – $50 each (cash-only). The exhibit will also feature information on both projects, interactive displays, and spot prizes.