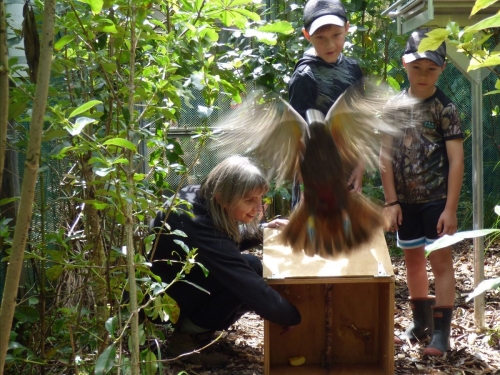 Department of Conservation Senior Biodiversity Ranger Denise Fastier says the reintroduction of kākā has been successful.

“This is the fourth instalment of kākā to the area, and we know it’s worked really well because at the beginning of the year we had chicks hatched to unbanded parents. That means the parents of the chicks hatched from birds that had been reintroduced. So now we’ve got at least three generations thriving in the area, which is just awesome to see.”

“Kākā were once common throughout New Zealand, but predators and loss of habitat reduced their numbers. By the time this project started they were only occasional visitors to Boundary Stream. Many years of intensive predator control - using a mix of traps and bait stations and involving arduous hours by many people - have got us to the stage of being able to reintroduce kākā and other vulnerable species to Maungaharuru. It’s great to have such a positive outcome for the enormous efforts made by many to get to this stage. If you’re one of the many people who has contributed to this, please take a bow.

“There are two remnant natural populations nearby; in the Kaweka ranges and Maungataniwha. The Cape Sanctuary began reintroducing kākā around the same time as we did. It’s hoped some of these birds might pop in for a visit, be beguiled by some of our hot new chicks, and stay to help the population grow. Or, equally, it could go the other way with the results of successful breeding of this population spreading out to the wider landscape and reinvigorating others. Eventually becoming one big happy family.”

This release follows others in 2013, 2014, and 2017 and will enable greater genetic diversity and reduce the risk of inbreeding. The five kākā were named by the community and it is thought they are all female.

Maungaharuru-Tangitū Trust Kaiwahakahaere Matua, General Manager, James Lyver, says this work is a vital step on the path to restoring the area.

“Our aim is to restore the kākā population along with other manu (birds) to when there were so many that the maunga roared with the sound of birdlife. By working with DoC, the Regional Council and others, we as tangata whenua are getting closer to restoring the mauri of Maungaharuru.,” says James. He adds “It is only through strong collaborative projects like Poutiri Ao ō Tāne that this vital restoration mahi can be achieved.”

With newcomers comes the mahi of looking after them. DoC is looking for volunteers to help the rangers feed the birds daily over the next few months. This is so the birds know this is their home. If you’re interested in this they can contact the Ahuriri-Napier DoC office – DoC is happy to offer free accommodation at Boundary Stream to those wanting to help.

Poutiri Ao ō Tāne started in 2011 and is now part of Predator Free Hawke’s Bay (PFHB), which also includes Cape to City and Whakatipu Māhia. PFHB in the future hopes to rid all of Hawke’s Bay of predators, including possums, stoats and rats. These large-scale projects will integrate biodiversity restoration into business-as-usual primary production landscapes in ways that deliver economic, social and environmental outcomes

• The kākā is one of 3 endemic NZ parrots, the others being the kākāpo and kea.
• Kākā can be identified by their browny red colouration and striking red underwing
• The national population is around 10,000, most of which are on predator free offshore islands like Kāpiti, Hauturu o Toi (Little Barrier) and Whenua Hou (Codfish Island).
• The distribution and number of kākā has been limited by logging of large mature trees (used to nest in), competition with possums and rats for fruit and nectar, and predation by introduced mammals, especially from stoats and possums who are known to kill nesting females.
• As a result, there tend to be more males within mainland populations.
• The timing and extent of breeding aligns closely with mast years, when food is less abundant, breeding is less likely.
• Diet includes fruit, nectar and insects. Their bill is very powerful, they use it to chew the bark off trees to access the sap and to demolish rotting logs to find the bugs within.
• Kākā are hole-nesters which makes them more vulnerable to predation. They typically lay 4 eggs and can do this twice during a season.
• The oldest known wild kākā lived to be over 27 years old.
• They typically weigh between 400g and 500g, the South Island kākā is about 100g heavier.
• They have amazing personalities and are very intelligent.
Find out more