Maungaharuru May Roar Once More 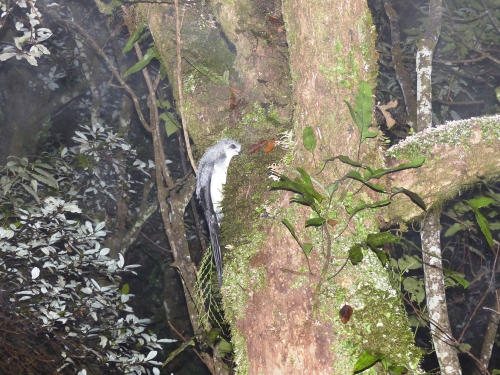 The Maungaharuru Range may soon roar again with the discovery of a tītī/Cook’s petrel having returned to its nesting site.

Once, these birds nested across the range in their millions, and when flocks took off or landed it sounded like the range was roaring.

However, habitat loss and predation by introduced mammals such as rats caused the tītī to become locally extinct. Which is why the collaborative project Poutiri Ao ō Tāne decided to initiate a translocation programme – the first of its kind in New Zealand.

“The name Maungaharuru translates into English as ‘the mountain that rumbled and roared’,” says Maungaharuru-Tangitū Trust (MTT) Trustee Tania Hopmans. MTT is a partner of Poutiri Ao ō Tāne.

“It would have been an amazing sight to see thousands of tītī flying out at dawn and returning at dusk.”

This is something the Bay may once again get to experience first-hand.

Almost five years ago 113 tītī were translocated from Hauturu o Toi (Little Barrier Island) to Maungaharuru under the Poutiri Ao ō Tāne project with the aim of establishing permanent populations in Hawke’s Bay. Translocations of a similar scale continued for the next 3 years

As part of the programme a sound system was set up to replicate a tītī colony, hundreds of manmade burrows were built, a predator-proof fence erected around the 1.9-hectare enclosure and countless volunteers gave freely of their time to feed the chicks before they fledged.

It has taken this long for the return because tītī are specialist deep water or pelagic foragers – often out at sea for five years before returning to their nesting sites to breed.

Hawke’s Bay Department of Conservation Senior Biodiversity Ranger Denise Fastier and her team have been monitoring the site since August last year.

“The importance of this little guy showing up cannot be quantified,” she says.

“This particular translocation was highly experimental. At a distance of 23.9 kilometres from the sea, it is the most inland of any translocation ever attempted and at 1000 metres above sea level it is also the highest translocation.”

She says for these reasons the Poutiri Ao ō Tāne team went into this not knowing if the translocation would work or not.

“I wasn’t sure they would return, but this little tītī showing up after so many years at sea is the first sign of its success.”

Trevor Taurima,Maungaharuru-Tangitū Trust Kaumātua, says he is very pleased with the return of the tītī back to the maunga and hopes it is a sign of many more to come.

Poutiri Ao ō Tāne is a unique collaborative ecological and social restoration project located in the Maungaharuru-Tūtira catchment, 60km north of Napier with Boundary Stream Mainland Island at its heart.

Aimed at bringing native flora and fauna back into the lives of the local people by embracing the knowledge of a wide range of partners.

The project plans to see the return of native species that have been lost to the area over time – and to see these species flourish, not only in the habitats we expect them to be in such as native bush, but also within the agriculture and forestry landscape.

Cape Sanctuary is currently running a similar program to Poutiri Ao ō Tāne in an effort to return this unique bird to the Bay.