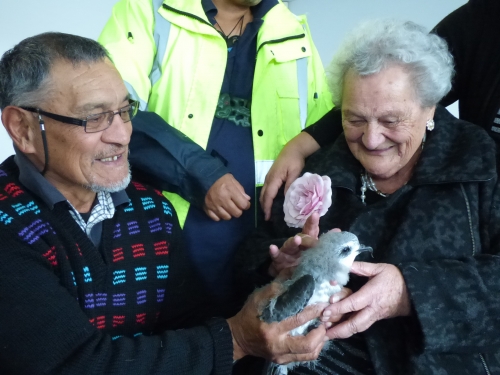 After months of preparation, 99 kōrure/mottled petrel chicks were translocated from Whenua Hou/Codfish Island, near Rakiura/Stewart Island, up to the Maungaharuru range in Hawke’s Bay.

After a few setbacks due to weather, the largest translocation of kōrure ever attempted under the Poutiri Ao ō Tāne programme got underway, the manu/birds safely making the 1,131 kilometre journey last Friday.

Once on the ground at Hawke’s Bay Airport, the manu were welcomed by members of Maungaharuru-Tangitū and Ngāti Hineuru, with Kaumātua Trevor Taurima performing a karakia in honour of the arrival.

Following the karakia, the kōrure were transported to a waiting helicopter and flown to the predator-free nesting site on Maungaharuru where they were carefully offloaded, rehydrated and settled into their new burrows.

"This is our fifth and final planned translocation and I want to thank all those involved who have made it such a success. Several Department of Conservation (DOC) staff spent 10 days on Whenua Hou, braving the weather as they weighed and measured the wings of the chicks making sure they were suitable for translocation," says DOC Hawke's Bay Operations Manager Connie Norgate.

" Maungaharuru-Tangitū is sincerely appreciative of Whenua Hou Iwi for the gifting of the kōrure chicks,” said Kaumatua Trevor Taurima.

“Appreciation is also extended to other Iwi who have gifted their chicks and manu to repopulate the Maungaharuru Range. This part of Poutiri Ao ō Tāne has truly been a successful collaborative exercise between four Iwi, Te Papa Atawhai/DOC, Hawke’s Bay Regional Council, Community Roopu and the many Volunteers", he said.

The kōrure will now spend 4-6 weeks at the Maungaharuru nesting site where they will be hand fed sardine smoothies and their health monitored by DOC vet Cathy Mitchell and a team of volunteers.

When the manu are ready, they will fly from Maungaharuru and spend three to four years out at sea before returning to the site to nest.

These seabirds are translocated at a young age, because kōrure take a mental picture of their nest site when they emerge from the burrow for the first time.

“In January this year, we had one adult return from one of our earlier translocations, providing excitement and evidence that the manu will return to the site they fledged from”, says Connie Norgate.

This Poutiri Ao ō Tāne programme started back in 2014 with more than 350 kōrure being translocated to Maungaharuru.

The translocations are part of an effort to restore seabird populations, which used to number in the millions on Maungaharuru. They are culturally significant to Māori and also ecologically significant, partly because of the nutrients they deposit from the sea back into the native bush.

At 23 km from the ocean, the Maungaharuru Range seabird translocation site is the most inland of any in New Zealand.

Poutiri Ao ō Tāne, and its sister project Cape to City, plan to see the return of native species that have been lost to the region over time.