Waitangi the tītī has returned 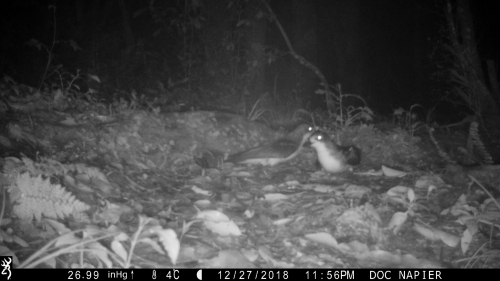 Waitangi the tītī/Cook’s petrel has returned to his nesting site at Poutiri Ao ō Tāne for a second year, and this time has brought friends with him.

This year a few more tītī have been spotted returning, as well as a kōrure/mottled petrel, which has caused great excitement.

Trevor Taurima, Maungaharuru-Tangitū Trust Kaumātua says, “The name was given to the manu/bird as he was found in a burrow in the Poutiri Ao ō Tāne seabird site on the Maungaharuru Range on Waitangi Day last year.”

Almost six years ago 113 tītī chicks were translocated from Hauturu o Toi (Little Barrier Island) to Maungaharuru under the Poutiri Ao ō Tāne project, with the aim of establishing permanent populations in Hawke’s Bay. Translocations of a similar scale for both tītī and kōrure continued for the next 4 years. The kōrure were translocated from Whenua Hou, an island off the coast of Rakiura/Stewart Island.

Connie Norgate, DOC Operations Manager says, “The returning of these adults to the site they were translocated to as chicks, is a great sign that a highly experimental translocation is showing evidence of success.”

Once, these birds nested across the range in their millions, however, habitat loss and predation by introduced mammals such as rats caused them to become locally extinct.

Connie says, “To have Waitangi back on the maunga and introducing a friend to his burrow is wonderful news.” She adds “Wouldn’t it be amazing if we found eggs soon?”

At a distance of 23.9 kilometres from the sea, it is the most inland of any seabird translocation ever attempted, and at 1000 metres above sea level it is also the highest.

It has taken this long for them to return, because these seabirds are specialist deep water or pelagic foragers – often out at sea for five years before returning to their nesting sites to breed.

The Department of Conservation team responsible for these translocations has been monitoring the site through motion sensitive cameras and checking burrows for signs of use since September. As part of the programme a sound system plays tītī and kōrure calls to replicate a colony.

The 1st camera image was on 1st December – the very same day that there was a celebration at Tangoio Marae of all Poutiri Ao ō Tāne translocations since 2011.

Trevor says, “Did the tītī hear the welcoming call of the Karakia and tuneful Waiata and decide to show their faces on camera?” He is quick to add, “The rewards of thePoutiri Ao ō Tāne whole community approach and translocations just keep getting better – may it long continue so that the maunga will haruru/roar once again.”