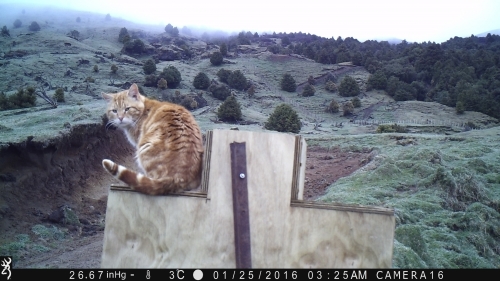 Trapping is currently used as the main way of controlling feral cats, but it can be time consuming and expensive. The Poutiri Ao ō Tāne project team (sister project to Cape to City) wanted to find out if there was a cheaper and less time consuming alternative, and asked Manaaki Whenua to help.

The team established 48 bait stations, and after pre-feeding with non-toxic rabbit meat baits for 14 days, three toxic baits were placed in each bait station. Chimney bait stations were used as their design reduces non-target animals, such as birds and dogs, from accessing the poison, but makes it easy for cats to access.

As 17 baits were removed from the bait stations, 17 feral cats were therefore believed to have been killed.  The camera monitoring showed that a single application of PAPP baits reduced the number of feral cats by an estimated 50%.

For logistical reasons, a second planned application of PAPP did not occur during the trial on Toronui. Although a single application reduced the relative abundance of cats significantly, it is likely that a second application would have resulted in a greater reduction.

The trial found that PAPP has the potential to be an effective and affordable tool for reducing feral cat densities across large areas. It may be useful both for initial ‘knock-down’ control of cat populations, and as a maintenance ‘spot control’ tool if cat densities were to increase within the maintenance area.

PAPP could also prove to be an effective tool for helping prevent spikes in predator numbers in areas with increasing rabbit densities.

A larger 9000-ha PAPP operation including Boundary Stream was undertaken as a result of this trial in 2018.