The benefits of ferret odour as a long-life lure 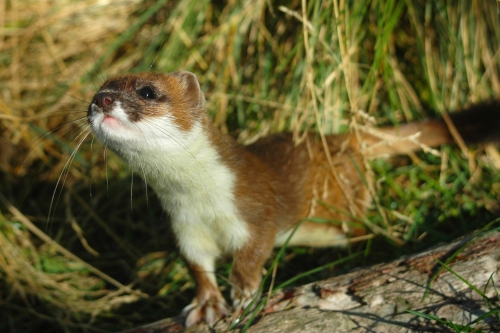 To find a more labour efficient way of trapping, that not only increased catches, but decreased labour, Manaaki Whenua – Landcare Research (MWLR) worked with a number of organisations including Predator Free Hawke’s Bay to quantify how effective the natural lure was, understand how long it lasted, and develop a synthetic copy of the odour.

Note. Ferret odour is a recognised lure for predator control.

Effectiveness of the lure

In Hawke’s Bay, the trial sites were Whangawehi Catchment Management Group, Hunua kōkako recovery project, Māhia Peninsula, and Kaweka Forest Park . Site selection was based on the presence of threatened native biodiversity, and differences in habitat and land use types.

Odour was collected on absorbent towels from ferrets at the MWLR animal facility. Each lure was housed in a stainless-steel container (a tea-strainer), which was suspended from a nail within a trap. A lure was added to every second trap along a trap line, in addition to the regular baiting protocol. The regular bait stations used rabbit meat and dog roll.

The study was designed to minimise the disturbance to trapping programmes while allowing for clear inferences to be made on the benefit of the lure.

The bait-only versus bait plus ferret lure captures of stoats and weasels at all sites combined were compared.

The lure increased mustelid captures across all sites, with a 150% increase in catch rate when ferret lure was added to the bait stations. 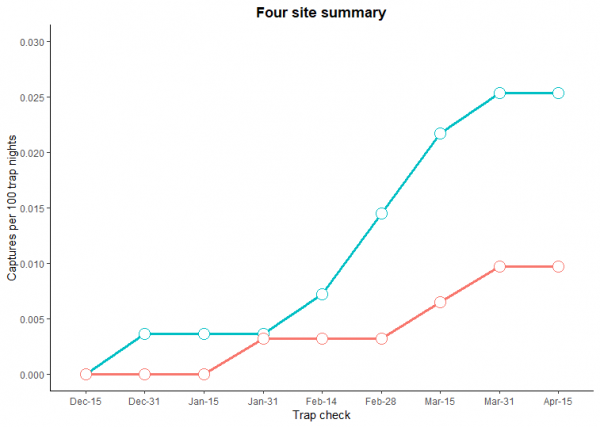 Although the capture rates for the lure alone were slightly higher than captures for the bait, there seems to be an additional effect when the lure is combined with a bait. Pen trial experiments have demonstrated similar results (Garvey et al. 2016), suggesting that the greatest capture rates will be achieved by combining these attractants.

A trial was undertaken at Manaaki Whenua to determine lure decay rates by testing cloth absorbed with ferret odour. The lures were placed in a way to simulate deployment in control operations, in DOC 250 traps placed in open grass and trees, and in a controlled lab environment.

Towels maintained their scent over the short term (6 weeks), but there was almost no odour left after a year. To understand how long towels remain attractive to mustelids we would need to know the decay rate of the specific compounds that attract but our testing suggests that towels will continue to be effective in traps for at least 4-6 weeks.

Since decay rates depends on the compound type, it depends which compound is the main attractant to mustelids and therefore additional trials to determine this compound are needed.

The response of stoats to the lure was studied to determine the chemical compounds that made it attractive. Bioassays were conducted in pen trials where 12 stoats were exposed to odour collected from 12 individual ferrets. Using a repeated measure crossover design, each stoat was exposed to a ferret sample on a nightly basis and responses were recorded with motion detection cameras. Three behaviour measures were recorded: 1) number of visits, 2) visit duration, and 3) time until first approach.

This was paired with chemical analyses of those same samples to identify specific compounds. Samples from the 12 ferrets were described using gas-chromatography mass spectrometry (GC-MS), an analytical method that can identify different substances within a sample.

Results were varied as stoat attraction varied across ferret samples. Chemical analyses tentatively identified 140 compounds in ferret odour that may be responsible for attraction, and eight have been identified as the requiring further investigation.

The compounds identified will now be tested in pen trials, alone and in combination, to determine the most effective synthetic lure. The most attractive mix will be trialled in established control operations later this year.

Further investigation into the compounds is required.