How do we know when we're at zero? 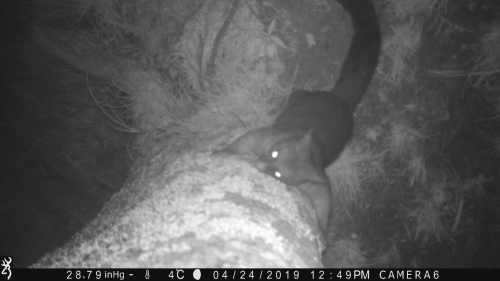 The Whakatipu Māhia project aims to completely clear the 14 616ha peninsular of possums, but how do you know when there are no possums remaining?

Eradication and Proof of Absence modelling1 is fundamental to the Whakatipu Māhia project to have confidence we have removed all possums from Māhia. The crucial questions are: can we achieve possum elimination with the proposed trap spacing and trap nights? Once we are no longer capturing possums, how many zero detections are needed to be confident there really are no possums left on the peninsula2?

We asked our partners Manaaki Whenua Landcare Research to help us answer these questions using models they have developed.

Researchers were able to investigate the effects of control effort over time by using a geographical model with information on pest habitat distribution, population dynamics and levels of control.

The variation in the trappability of individual possums was found to be very important when determining the trapping level required for success. Researchers noted that passive control methods relying on possums investigating and interacting with devices may fail to locate individuals that are less active or too wary to approach a device. For this reason the project team are using a multitude of techniques including active (e.g. traps) and passive (e.g. cameras) methods to ensure success.

Six months of zero detections with a surveillance network including 475 leg-hold traps and 14 cameras is sufficient to declare with high confidence that possums have been successfully eliminated from the south of the peninsula (phase 1 of the eradication plan).

Researchers found that eradication of possums on the Māhia Peninsula is feasible if buffers of bait stations are installed around high risk areas and across the neck of the Māhia Peninsula, limiting immigration from untreated areas. If there isn’t a barrier, it’s likely that reinvasion will happen within three years. Additionally, use of active (e.g. trapping) control methods may need to be used to catch the trap shy individuals. Under the proposed surveillance network, at least 6 months of zeros detections will be required before elimination of possums to the south of the peninsula can be declared.

2Proof of Absence modelling helps demonstrate suppression/eradication. Once you have tested and implemented eradication programmes and you get to zero detection, the question becomes ‘how many zero detections are needed to be confident there really are no possums left?’