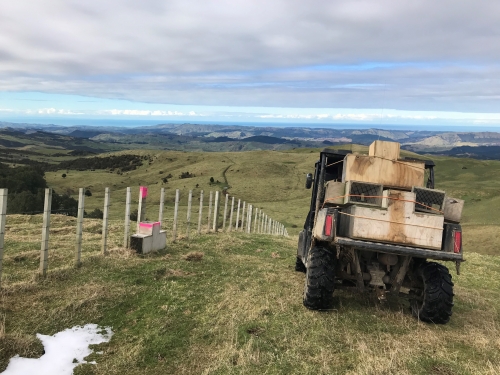 Feral cats have a significant impact on native wildlife, are significant predators across farmland in New Zealand, and can far out-number mustelids (ferrets, stoats and weasels). In Cape to City, approximately five feral cats were captured for every mustelid, a trend also reflected in predator monitoring results. Feral cats have been recorded consuming birds, lizards and invertebrates and are hosts of toxoplasmosis, a disease harmful to livestock, wildlife and humans.

Managing feral cats at scale is notoriously difficult and expensive, and finding ways to efficiently manage them is an important part of New Zealand’s Predator Free 2050 goal.

Currently, most cat control is live capture and kill traps, despite poison baiting being typically more cost-effective due to reduced labour costs and capital investment (i.e. purchase of traps). However, poison bait for feral cats has had little use on mainland New Zealand due to a lack of effective and humane baits, risks to non-target individuals (e.g. domestic cats and dogs), and little research on the population impacts from largescale control or the rapidity of reinvasion.

Para-aminopropiophenone (PAPP) was first registered in New Zealand in 2011, is more target-specific than other toxins, and has been shown to kill cats humanely. A 2017 Hawke’s Bay field trial over 1,000 hectares showed the potential for PAPP as an effective, cheaper, and less time-consuming alternative to trapping. Following this successful trial, a larger trial in 2018 covered 9,123 hectares of the Poutiri Ao ō Tāne project area in Hawke’s Bay. The trial aimed to estimate the feral cat population before and after the trial and compare the efficacy of PAPP to other control methods.

Camera traps were used to monitor the number of feral cats on Opouahi Station (treatment site) and at Waitere Station (non-treatment site). A network of 287 bait stations was established in 500m grid spacings across the treatment site.

Toxic baits were removed from at least 130 bait stations, with a likely result of at least 130 feral cats killed. This resulted in a 39% reduction in the relative abundance of feral cats after the operation.

This reduction in feral cat detections and potential number of kills was achieved at less effort and cost than conventional techniques such as live capture. However, this 39% reduction is less than we would have expected from previous trials. Rapid immigration of feral cats following the operation could mean PAPP is unlikely to have long term results when used on its own. Further trialling is recommended to explore effectiveness of annual operations through time, and the effect of rabbit numbers in control areas.