From Galaxiids to the Stars – everything is connected! 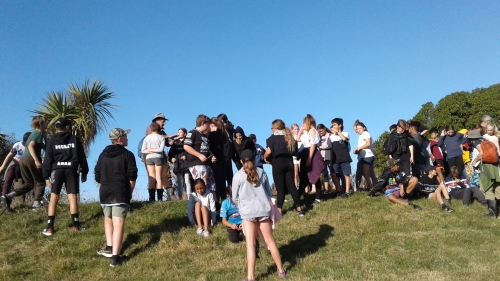 Take one perfect Hawke’s Bay autumn day, fifty enthusiastic Year 7 and 8 students, two teachers brave enough to take learning outdoors and a passionately supportive community of helpers and what do you get? Unforgettably relevant, place-based learning!

Throughout the FEP, learners develop a rich appreciation and understanding of the ecological and cultural connections of their local waterways and wetlands through hands-on learning with skilled volunteers and people from local agencies who are out there doing the mahi of freshwater conservation in Hawke’s Bay. Come with us, on our learning journey!

We’re standing on the left bank of the Clive River and the inanga[1] spawning site our group is assessing is one of several productive sources of Hawke’s Bay’s growing whitebait fishery. The term “whitebait” actually refers to the young of five different migratory species of native fish from the family Galaxiidae, (the patterns on the skin of adult fish look like a galaxy of stars) with juvenile inanga making up some 87% of the local catch. Contrary to their national conservation status of “at risk – declining”, inanga populations in Hawke’s Bay are increasing steadily. This inspiring local reversal of the national trend is largely due to pioneering work, ongoing since 1987, to identify, protect and restore inanga spawning habitat in the region.

“If you want to eat whitebait fritters you have to look after inanga habitat”, long-standing freshwater expert Hans Rook (Rooky) tells the students.

The afternoon finds our group at Ātea a Rangi, the Celestial Compass at nearby Waitangi Regional Park. Here, Ātea a Rangi Trust representative Phil Belcher skilfully weaves connections between earth, sea and stars.  Phil’s korero, drawing on his rich experience as Kaiwhakairo (carver and teacher), brings to life the power that lies in honing our skills of observation and tuning-in to the environmental signs or tohu, surrounding us.

Later, we walk around the southern margin of Horseshoe Lake, where Rooky shows us what’s possible when agencies team up to achieve a ground-breaking project with multiple benefits.  The 15ha wetland that’s under construction here complete with fish passages connecting to nearby waterways will restore habitat for “Mum and Dad” Galaxiids and the myriad other plants and animals connected within the same ecosystem.

Today we’ve learned how tuning-in to the signs of the galaxies enabled our pioneering ancestors to navigate the Pacific, successfully growing their crops in unfamiliar soil wherever they settled. Tuning-in to the Galaxiids in our waterways now enables a new generation of pioneering champions to successfully restore the mauri of inanga, a taonga species.

Is this an uncanny coincidence, or does it highlight the power of what we can achieve when we simply tune-in, observe and learn from the world around us? Today’s learning has transported us from local Galaxiids to distant galaxies, yet we see that it’s all connected.