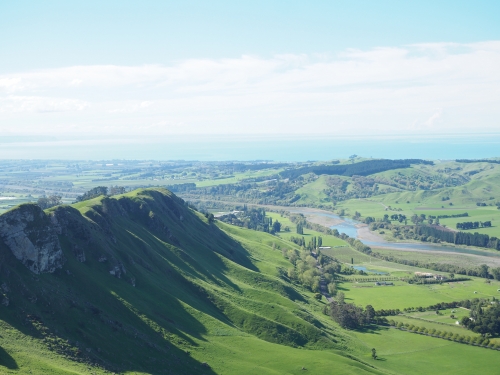 A major partnership of local and national agencies will see more than $6 million invested in conservation in Hawke’s Bay over the next 5 years.

The ‘Te Matau a Maui’ project will be a win-win for both farmers and those working to protect native species, by coordinating pest control and conservation work across wide areas of land, from conservation areas through to actively farmed land.

The project will kick off early in 2015, focusing on 26,000 hectares of Cape to City land between Waimarama and Havelock North.  It is being jointly funded by the Aotearoa Foundation, the Department of Conservation, Hawke’s Bay Regional Council, Landcare Research and Cape Sanctuary.

Hawke’s Bay Regional Council has agreed to commit $1.5M to the project including $300,000 of staff time over the next five years.

A core project funder, Aotearoa Foundation, is committing $2.3M also over the next five years.  The Department of Conservation has committed $1.6M including sustaining the Poutiri Ao ō Tāne work and Landcare Research $0.7M towards monitoring and research for the wider project.  Cape Sanctuary is a key partner already investing around $600,000 annually.

The proposal has evolved over the past two years, building on successful pest control techniques used in the Poutiri Ao ō Tāne project – which was also initiated with the support of the Aotearoa Foundation –  and is already restoring sea birds and other native species to an area in the Maungaharuru Ranges, near Tūtira.

“Success long term for New Zealand’s unique biodiversity substantially rests on our ability to integrate public and private biodiversity efforts across New Zealand. For that to succeed it must be a win – win for our farming community. This is one of the cornerstones of the Hawkes Bay regional biodiversity strategy,” says Fenton Wilson, Chairman of Hawke’s Bay Regional Council.

“We’ve recorded declining possum numbers on farmed land and urban areas thanks to supportive landowners and residents. That provides the opportunity to target other predator pests in our farmland as a pathway to large scale predator control similar to the success of Councils’ Possum Control Area programme” adds Fenton.

Lou Sanson, Director-General of the Department of Conservation, believes that this project is at the cutting edge of New Zealand conservation efforts using strategic partnerships.

“The chance to have Government, Local Government, Landcare Research and Hawke’s Bay landowners come together with the help of the Aotearoa Foundation, chaired by Julian Robertson, Andy Lowe and others to bring back our birds is a once in a lifetime opportunity,” says Mr Sanson.

“Hawke’s Bay can proudly lead the way in how New Zealand communities are coming together to halt the loss of our precious native wildlife and unique plants that we all love."

Andy Lowe who, with Julian Robertson, is a driving force behind the Cape Sanctuary project believes that long term environmental success for New Zealand needs threatened species conservation and biodiversity work to co-exist with human habitation, recreation and food production. “When we embrace that vision we will have a real chance to reduce the current decline in the unique biodiversity across our country” he says.

Crown Research Institute, Landcare Research, will contribute $700,000 worth of science and research.

Chief Executive, Dr Richard Gordon, says, “This project is exciting to us because of its scale, vision and the range of benefits for all parties.  Our role is to contribute innovative tools and decades of experience in predator science at large scales. This publicly funded science will drive adaptive management within the project.”

Throughout the project there will be a strong focus on community involvement - in farmed and urban areas, on Māori partnerships, on learning opportunities for school children and the wider agencies that engage regularly with the project partners.