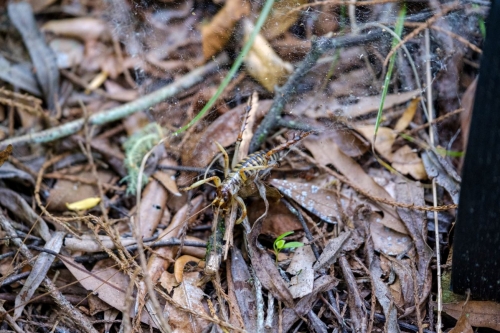 Invertebrates make up a large proportion of biodiversity and they have critical roles in the environment. However, their inclusion in biodiversity monitoring and conservation planning has lagged behind larger fauna because collecting and sorting invertebrates using conventional monitoring techniques is often time consuming, expensive, and restricted to experts who can identify invertebrates accurately.

A 2017 study examined at how invertebrates could be monitored using emerging DNA metabarcoding techniques by providing the ability to characterise entire invertebrate communities from a single, easily collected environmental sample. These techniques have the potential to make it easier and more cost-effective for conservation groups to undertake invertebrate community monitoring and to evaluate the performance of restoration projects.

DNA metabarcoding analysis works by extracting DNA from environmental samples such as soil, water, leaves, or bulk invertebrates, and then analysing parts of genes that can act as genetic “barcodes” to identify species whose DNA was present in the sample. Soil, for example, is easily collected and includes lots of DNA molecules of organisms that live in or near it.

It was hypothesised that:

The study looked at Cape to City as an example of a landscape-scale restoration project and aimed to characterise the invertebrate fauna of an isolated, coastal forest fragment at Mohi Bush using both conventional monitoring and DNA metabarcoding methods.

The budget was the same for each method – $20,000 – in order to directly compare the value for money.

The invertebrate samples were first analysed by conventional methods – morphological identifications and assessment of specimen composition.

DNA metabarcoding was then used to analyse both the invertebrate samples, and the soil samples.

The results of the study support the idea that DNA metabarcoding can be used as a tool to characterize whole invertebrate communities from either bulk invertebrate samples collected using malaise or pitfall traps, or from soil samples. DNA metabarcoding provided broader and more detailed invertebrate biodiversity information than conventional monitoring methods, for the same cost. The soil DNA analysis identified the widest range of invertebrate types.